Thank you for joining me in the Zeina Step-by-Step instructional program.

If you're reading this note, it probably means you are already the kind of dancer who is willing to put in extra effort. You understand the value of active learning, and you are motivated to work independently. Like me, you take dance seriously.

Thank you! I sincerely appreciate the conscientiousness you contribute to the culture of belly dance.  You make me both proud and humble.  I hope it is okay that I think of you as a member of my dance family.

How can I make our family stronger?

In the coming weeks (of November 2014), I hope to assemble an online study group. Watch this blog, or tune in on Facebook. Depending on the response, future groups may follow.

For ongoing “technical support,” please feel free to contact me with your questions. For very specific questions that involve personalized feedback, I'm available for private lessons or consultations, either in person in New York City, online via webcam, or on the phone. But for general-interest questions, I will do my best to offer additional information or other resources via this site.

→ Next: Time-Indexed Table of Contents for the Zeina Step-by-Step Video

Posted by Autumn Ward at 1:49 PM No comments:

If you'd like to perform the Zeina choreography or a similar piece of theatrical Oriental dance, the costume that I recommend is a classically styled bra and belt with a lot of ornamentation. By “classic styling,” I mean something that doesn't look too specifically trendy. I also mean something that doesn't look cheap--a costume that fits you really well, looks elaborate, and has finished details.

Personally, I almost always prefer minimalist costuming, but for Zeina I think a really fancy costume helps to set the mood and communicate that you're doing something that has a very high level of refinement. You're looking for the belly dance equivalent of “white tie” attire. If you prefer more modest costuming, I think a body stocking--either transparent or opaque--would be fine, but I probably wouldn't go with a dress unless you have some personal reason for preferring to wear one. I think the iconic nature of the bra and belt set is more in line with the kind of romantic fantasy in which Zeina is anchored.

Another thing I recommend for this piece is jewelry, and, if it's an option for you, wearing your hair down. Again, usually I prefer to go very clean and very minimal, but for this project I specifically choreographed and rehearsed with hair and with jewelry taken into account. When you rehearse, make sure you try out any jewelry you're going to wear. This is always a good idea anyway, but especially for Zeina you should make sure that you can run the dance with the jewelry you want to wear. For me, bracelets in particular were problematic.  If you plan to wear bracelets, you may find that they fly off during some of the faster arm gestures, or that when you are working with your hair you get snagged. If these are issues, either tweak the choreography, or tweak the jewelry.

I want to show you one jewelry trick in particular that I use to manage necklaces. 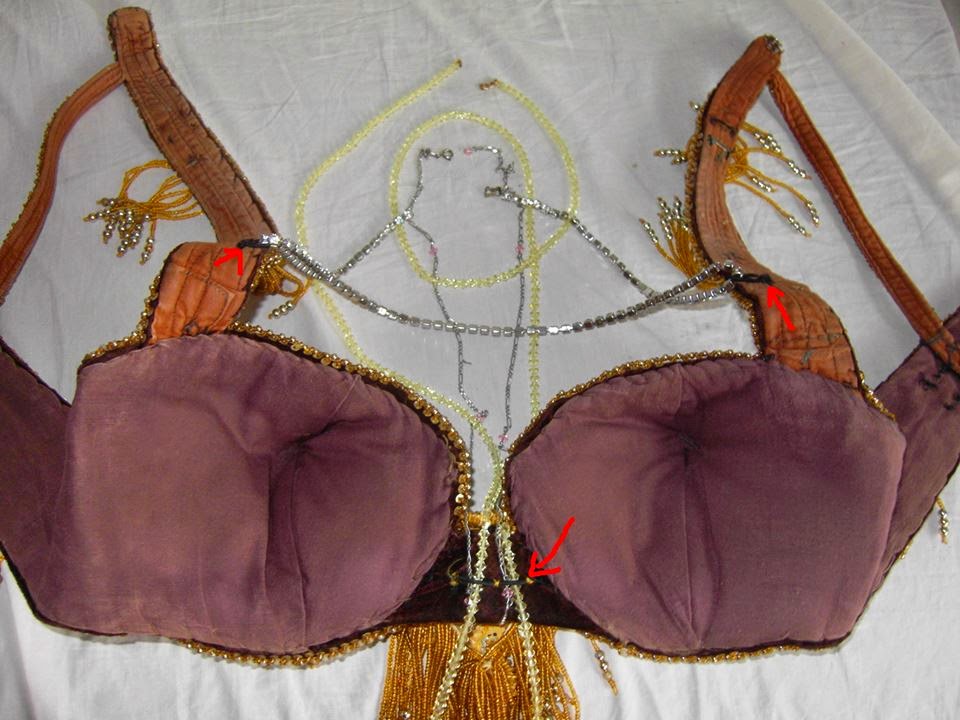 You'll see here on this top I've sewed little elastic loops. These are to thread the necklace through, to keep it anchored down so that it won't whack me in the face or get untidy. I just used elastic cord, but you can also use covered hair rubber bands. Just select a band of the right size in a non-clashing color, slip it over the strap, and then put a few stitches around the band to hold it at the right place.

One other thing: everybody always asks me about my gold shoes. The shoes I'm wearing for the Zeina Step-by-Step video were made by Miguelito, but the company is no longer manufacturing this style. I don't know of any other source for metallic leather ballet shoes – if you have a source, please let me know.

I began work on Zeina in early 2014, during a period of particular bafflement over many dancers' enthusiasm for choreographic sequencing that deliberately sets asymmetrical movement combinations to highly structured call-and-response traditional belly dance music. My original thoughts took the form of this Facebook post of February 13, 2014, reprinted below:

Dancers: there's a trend in Modern Egyptian that I think is bleeding out into the larger bellysphere to NOT interpret call-and-response as repetition with variation. I'm talking about totally nonsymmetrical composition—choreography like: 8 counts of this (on the call phrase) then 8 counts of something else (on the response phrase), then 8 counts of something completely new (on the repeat of the call phrase), then 8 counts of a fourth entirely different thing (on the repeat of the response phrase, which, yes, is often wrapping up differently than the first response phrase, but still references its first iteration), and then, regardless of where the music goes next, switching to a 5th then 6th then 7th etc. whole new thing continuing thus until the end. All the discrete combinations individually interpret their respective chunks of music very well, but then the combinations don't link into a map that matches the map of the music.

I've discussed this a little with a few a dancers I know, and it's been explained to me that current popular perception (particularly in competitions and so-called "master classes") is that any use of repetition is "boring" and "easy" that the "professional" is above that kind of "beginner" approach. I completely agree that it's boring (if not downright lazy, sloppy, uninspired, amateurish, banal, etc) to return to identical phrases of choreography. But I don't understand the critic who turns up her nose at, when it's musically inspired, 8 counts of something leading to the right, followed by six counts of the same thing except leading to the left and then ending with two counts of some sort of phrase-ending punctuation that transitions you into the next thing. Does your ability to hear the music only last for 8-count increments? If, after 16 counts, a new instrument plays 16 new counts of the exact same melody line we just heard, you DON'T want me to draw a new version of and/or expand on the shape and/or theme I introduced in the previous section? I should not link my phrases into a coherent whole, despite the fact that the music I'm dancing to DOES have a deliberate internally coherent structure?

Is this really just me? I get that this new-thing-every-8-counts approach is a way to cram more stuff in your dance, and that makes for greater dynamic range and more opportunities to showcase technique so it's more attention-grabbing and OOH SHINY. That part is great. I just don't get why anyone actively prefers ABCDEFGH choreography sitting on top of A1-B1-A2-B2; A1-B1-A2-B3 music.

With these ideas in my head, my work on Zeina, in many ways, became a love letter to symmetry: a defense and celebration of a very specific aesthetic. Working with the program, you will see that the composition is rigorously balanced—every step is just so, placed with great deliberateness, perfectly gridded to the map of the music.

But is music interpretation the best, finest, quantitatively superior approach to choreography, and is a one-to-one movement-music correspondence the pinnacle of music interpretation? Sometimes, maybe, but sometimes surely not, and asking dancers to confine their efforts to any single approach would not serve the interests of the art form. Zeina's aesthetic is simply one flavor of many, and if some other flavors are not so much to my taste, it is at least in part because they are under development. My thoughts in this vein, composed as a followup to the above Facebook post, are in this blog post: The Value of Professional Choreography.


I have not yet decided on my next project, but having put an enormous investment in Zeina, I am ready for a change of pace, and am likely to take on something totally different, perhaps even a dance that takes me in a totally free form direction, or to fluffier fare for a mainstream commercial audience. But I think I will always love choreographing to perfectly trace the shapes of sophisticated accompanying music; to me, this approach creates a whole that is greater than the sum of its components. Music and movement become more sensually affecting when they synesthetically translate one into the other. By balancing the Apollonian element of orderly structure against the Dionysian element of belly dance vocabulary's winding sinuosity, the dancer intensifies the most compelling characteristics of each. Drilling down into melody, musically-shaped choreography reveals nuances that might otherwise escape the appreciation of the less-engaged listener.

Whether or not dancers working with this program choose to emulate the approach I took with Zeina, I hope dancing the choreography will at least give dancers a deeper appreciation for the richness of traditional belly dance music and perhaps inspire some new interest in quiet complexity. I have heard, more than once, that Zeina is a “boring” song, and not a good choice for a serious treatment – perhaps my contribution will help the previously underwhelmed find greater enjoyment in listening and dancing to this classic tune.

→ Next: Working with the Zeina Step-by-Step Instructional Program

Posted by Autumn Ward at 2:57 PM No comments:

NOTE, Oct. 19, 2014:  This document was created from a pre-release draft copy of the Zeina Step-by-Step.  I have not yet checked to make sure that it corresponds to the official published version.  An update is forthcoming.

Posted by Autumn Ward at 4:06 PM No comments: